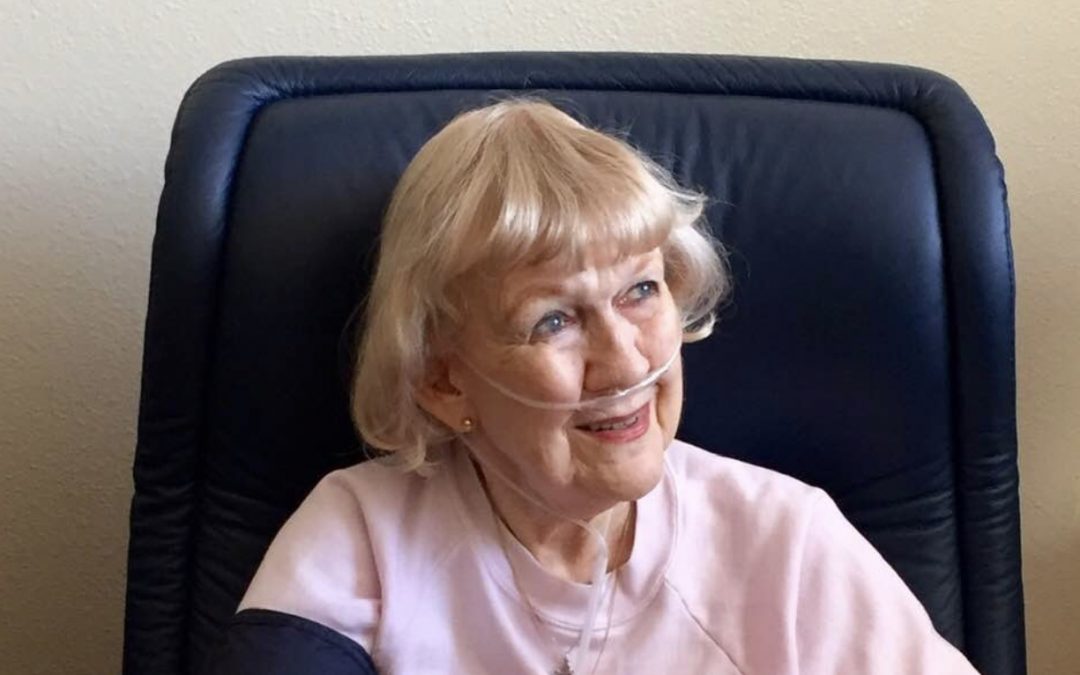 In the passage from John’s gospel that we just heard, Jesus assures us that whoever believes in the Father and hears the Son has eternal life and that the passage that looks to us like the end of life is a passage from time into eternal life. This is the central promise of Christ: death is not the end; life in Christ is eternal life. He is the Alpha and the Omega, the beginning and the end. In a few minutes during our Eucharistic service, all of us will briefly interrupt the priest’s prayer of consecration and say together “we remember his death; we proclaim his resurrection; we await his coming in glory.” In another form of the liturgy we put it differently: “Christ has died; Christ is risen; Christ will come again.” Past, present, and future, all of time and eternity. But it is all too easy for us to fix our attention on memory and hope and forget the present. We remember Christ’s death long ago. We hope in his return in the future. But do we meditate on his presence with us right now? The missing piece of an active faith is the understanding of the presentness of the Resurrection.

To the thirsty God will give the water of life, and death shall be no more. Who was ever thirstier for the water of life than Nancy Johnston? Nancy was committed to her family, her friends, and her church, this church, where she was married, baptized her children, and where we will today inter her ashes. Hers was a complete Christian life led in that sure and certain hope we refer to in our liturgy. She did not change with the winds of fortune; in the forty years we were friends she was the same person, constant in her affections and her convictions. She was not a Sunday Christian. For years she was part of our little group saying the Daily Office in the chapel here. When she could no longer drive, she asked me to pick her up and take her with me.

Nancy led a life bathed in words and music. One of the first things that impressed me about her was that in the choir, she would stand cradling the hymnal at her waist but never looking down at the words or the music. Now I could understand memorizing the first verse of familiar hymns, and maybe the second. But she even knew the third and fourth verses by heart, words and music. When I told that memory to Sheila Shelton, who stood next to her in the choir, she said Yes, and she wasn’t even singing the melody; she was singing the alto part!

Humility came naturally to Nancy. She could have gone to a conservatory and had a career as a concert pianist, but she fell in love with an English professor named Al and came from Kentucky to Florence and taught piano to children. Her pride was reserved entirely for her family. She herself never sought notice. When she played as an accompanist for a show, she took no curtain calls. Most members of this parish were unaware that she regularly found out who was ill or homebound and visited them. She was famous among her close friends for her anonymous early morning birthday calls with Happy Birthday playing on a music box or a pennywhistle, and she was known for her little self-deprecating poems, written out longhand and slipped to her friends on their birthdays. She referred to herself as a poetaster, not a poet. She always remembered my birthday because it was December 16th, which was also Al’s birthday. Here is a typically modest one full of punning word-play that I saved from 1997:

My muse was not much — amused —

At my last poetic endeavor;

Said she, “You can not be excused”

And with me all ties she did sever.

Of a way to say Happy Birthday,

And now that you’ve this perused,

You can see why my Muse flew away.

This poetic custom provoked retaliation of course. When she retired from Trinity’s choir after forty years or so it was on her 70th birthday, three score years and ten. So I sent her this on February 16, 2001. The more you know A E. Housman’s poetry, the more – amusing – this will be to you. Housman was one of her favorite poets:

Blondest of friends, our Nancy now

Is hung with crape and furrowed brow,

And not herself. Her thoughts may rove

To Housman poems by the drove.

For of her threescore years and ten

How many will not come again?

She dare not think the question through;

But mock her not, ‘twill come to you!

I hold that music, anthems sung,

And verse remembered keep her young,

And springs will pass, and out she’ll go

To see the cherry hung with snow.

Nancy lived the life complete, with both the words and the music. For years she volunteered with the Reading Aides teaching illiterate adults how to read. Many of her friends will remember her ability to recall whole stanzas of poems and passages of Shakespeare. She came by it honestly, as Maggie, her mother would never use a ten-cent word when a fifty-cent word would do. She often told the story of going to Rogers department store with her Maggie, who was nearly a hundred years old, and who was looking for some lotion containing aloe. After having made the poor young clerk bring out all sorts of lotions and find out for her which contained the most aloe, Maggie picked up the lotion, looked at the clerk, and asked “but can you attest to its efficacy?” The poor fellow got this blank look on his face. He had no idea what she was asking. Seeing the problem, Nancy translated for her mother: “She means, Does it work?”

She made lists of words of particular types. She was fascinated for years with words with disyllabic stress changes. The same two-syllable English word used as a noun and an adjective or a verb will shift the stress from one syllable to the other: perfect and perfect, or conduct and conduct for example. She would call me up excited when she had found a new pair. And I still have a long list of double words she assembled like mumbo-jumbo, hanky-panky, harem-scarem, okey-dokey, willy-nilly, and razzle-dazzle.

Even before she left her home on Oakwood Circle for Merrill Gardens, now Renaissance, she made use of the new technology of e-mail mainly for finding out more about words. Here are some of the questions I found among my old e-mails.

“Why are ladybugs called ladies? There must be a few gentleman bugs around.”

“Hi, Tom. What’s the background of cahoots? As in, she was in cahoots with her. Have I asked you this before?”

“How did we come to be ‘out of kilter’ which I am today.

Or I was asked to identify the source of some line of poetry that was running through her head separated from its context. Another e-mail in my collection: “From what is this the first line? ‘The breaking waves dashed high/On a stern and rock-bound coast.’”

Sometimes it was just the quotation and the question: where is this from was understood

“Full many a flower is born to blush unseen

And waste its sweetness on the desert air.”

The very last question she asked me I will always remember. It was just a couple of days before she died. She was so weak she could not use the keyboard so she asked Margie to ask me. What is the story behind ‘caterwauling’? Here is a woman at the end of her life who can scarcely breathe, and she is so far from being morose or afraid of dying that her big concern is to discover something she didn’t know about a strange word,

Poetry is merely words so arranged so that if one were to be altered, the whole would be diminished. The words and the music fitted perfectly together makes a song that endures in our hearts. Nancy’s life was a life full of poetry and music, a song complete. Her life was a life of love of poetry and music given freely to family and to church. Of her three children, one is a fine poet, one is a talented church musician, and one was consecrated a bishop in the National Cathedral. Each of them is compounded in differing proportions of the elements of Nancy’s life. She still lives in her family and her ashes will now rest in this church.

The final office in the Book of Common Prayer before day’s end is Compline. It begins “The Lord Almighty grant us a peaceful night and a perfect end.” I know no one who had such a perfect end as Nancy Kopp Johnston. Father Andy had anointed her with the oil of unction earlier in the day. She was not afraid at all. She talked about her death matter-of-factly without any fear or trepidation. Dying was part of living, and Christ was waiting for her. At the end, surrounded by her children, every breath an effort, she whispered to them “pray, pray” and died. She was not asking them to pray for her to live but to die. She could do that because she understood and believed in the presentness of the Resurrection. I had been with them all that afternoon but was not there when she died during the night. Margie’s way of telling me that her mother had died was a perfect one-line e-mail message: “Easter Day for Nancy Johnston.”

All this brings me back to our gospel reading. The sure and certain hope in the resurrection to eternal life is the foundation upon which a complete life in faith, a life with the words and the music perfectly matched, can be lived. Such a life is founded on the presentness of the Resurrection. If we think of the Resurrection as only a past or future event, it is irrelevant to us now. And we live in the now. G. K. Chesterton was interviewed by a reporter once and asked what he would do if the risen Christ suddenly appeared and stood behind him on the street, The question was asked as a challenge, of course. Chesterton’s answer was “He is.” “The Resurrection needs to be experienced as present risenness. . . .An awareness of the resurrected Christ banishes meaninglessness.” (Brennan Manning) Despair is not allowed in a life lived in the presentness of the Resurrection. Nancy banished meaninglessness and despair and lived the words, the music — the complete song. Let me close in her own words with a poem she wrote almost exactly 19 years ago, worthy of her beloved Emily Dickinson but inscribed only “To Myself.”

Something friendly is about the grave;

The soft, protecting earth that warms its seed

Folds close about it; its precious secret saves,

And leaves the world to ponder on its need.

The rains that fall so soft, the warming sun,

The host of all the elements conspire

The cycle of the Universe entire.

If we could but our fearing doubts resign

To this supernal Force that wills to guide

Us through this earth-bound Form, this part-Design,

To lead us where full Being must reside.